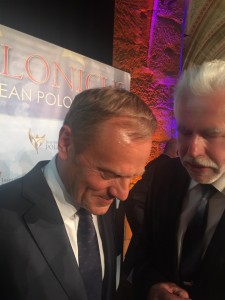 On 28th April, 2018 in Aachen. The prestigious “Polonicus” award was presented to the President of the European Council, Donald Tusk, and the former President of the German Parliament, prof. Rita Süssmuth for their contribution to the Polish-German dialogue and promotion of the Polish culture in Europe was a great opportunity to meet European, Polish and German representatives of the political elite.

The ceremony  was held in the historic coronation hall of Charles the Great in Aachen, and was a perfect opportunity for a discussion between the President of the European Business Club,  Zbigniew Roch with the guest of honor Donald Tusk.

The main topic of these discussions was the issue of the EU foreign policy, especially regarding the cooperation with Turkey and the Arab countries.